God at Our Feet: Homily for Maundy Thursday, 2019 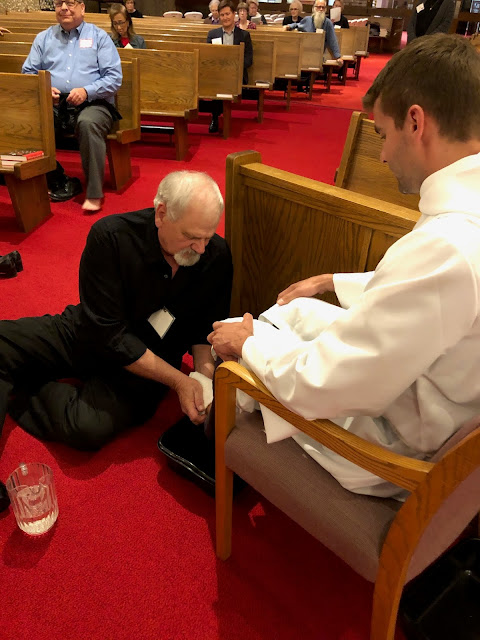 This is what brings us together—today and every day. Love. It’s there at the start of our gospel reading, too: “Having loved his own who were in the world, he loved them to the end.” Jesus is getting ready to leave his disciples—but he wants to show them what true love is. And he gives them a concrete example that they will never forget.

What is the act Jesus chooses to demonstrate his love for his disciples? Something so humbling that no one would have expected it. Jesus kneels before each one of his disciples, and takes their feet into his hands to wash them. It absolutely surprised the disciples—having Jesus get up at the end of the meal, stripping off his outer garment, tying a towel about his waist, getting the water and the basin. After all, foot washing was usually done before the meal—sponging off the dust that clung to the feet from a day’s journey on the roads and streets. It was also usually done by a slave or by a woman. It was a humble act of servitude.

Yet Jesus reverses the order here—forever linking what we would later call the Eucharist with loving, solicitous service, as symbolized through the foot washing. It’s an important reminder to us, as well, that we must not come to this table “for solace only, and not for strength; for pardon only, and not for renewal,” as one of our own Eucharistic prayers states. 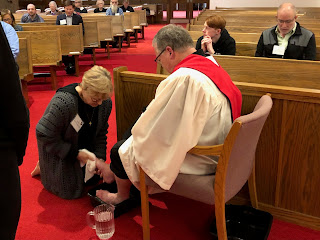 And yes, it makes us as uncomfortable as it did the disciples, this washing of feet. From the time we learn to walk, though, our feet bear the imprint of the habits and the accidents and events of our lives. They get callused where they rub against rough ground, they get misshapen if we wear shoes too small or if we study ballet, they spread wider and ache if we spend too much time on them. They are the very sign of our vulnerability.

Nonetheless, Jesus takes each one of those feet into his hands, lovingly washing them and drying them, taking his time. Those feet are going to take a variety of paths going out from that place: some are going to go with Jesus to pray. Some are going to go to betray Jesus for silver. Some are going to run away when accused of being a follower of Jesus. Tenderly, Jesus washes his apostles’ feet—even Judas’s, whose act of betrayal gets omitted in the middle of our gospel reading.

In the verses omitted here tonight, Jesus quotes Psalm 41:9- “Even my dear friend in whom I trusted, who ate of my bread, has lifted his heel against me.” I wish they had included the quote from Psalm 41, for, in our reading tonight, we see Jesus taking that same heel of his betrayer and washing it. In washing Judas’s feet alongside the others’, Jesus declares not just his love but his forgiveness for Judas’s betrayal. This is what Jesus means by love. He loved his own until the end—even Judas.

Throughout Jesus’s ministry, we are reminded over and over again that his kin-dom will challenge and upend all of our human notions of power and authority. And the means by which those notions are challenged is love. The Eucharist and the foot washing are both rooted in that love that is Jesus’s final, enduring commandment to us as his disciples then and now.

And if we look beyond tonight’s liturgy through the remainder of Holy Week, we can see a pattern emerge. The combined narrative of these three days is filled with movement. We begin with Maundy Thursday’s foot-washing, and the stripping of the altar as we remember Jesus’s last meal with his disciples and the setting in motion of his betrayal. Good Friday recalls Jesus’s arrest and crucifixion, and reminds us of the deep symbolism of the cross in our lives as Christians. The Easter Vigil then describes the arc of salvation throughout scripture, and then offers us the first opportunity to proclaim the resurrection. Running through this narrative, pun intended, is a journey through our own devotional growth as disciples.

As I was thinking about this service tonight, I was reminded of the shock that many felt six years ago when Pope Francis washed the feet of twelve prisoners in Rome at a youth detention center. Not all of the young prisoners were Catholic, or even Christian; some were Muslim. But what most shocked some observers were that two of the prisoners were female, and the pope washed their feet ass well. Since the revival of the foot washing tradition in the Roman church in 1959, popes had usually washed only male feet, and usually Catholics—often other priests. However, St. John Paul II washed the feet of homeless boys, although he and his immediate successor later restricted the rite to priests.

Pope Francis, staying true to his customs from before his papacy, reversed that policy and washed the feet of prisoners—yet in 2013, the shocking part was not the fact that he washed the feet of prisoners, but that two females were among the twelve, and that they had included non-Christians. Yet in responding to criticism about the symbolism of such perceived boundary-violations, Francis’s spokesman was clear that the point of the foot-washing ceremony was as an act of love and service to all.

Jesus calls us to model his acts of humble service in the world. Jesus models his own washing of the disciples’ feet as one that they are called to emulate both individually and as a mark of their community. 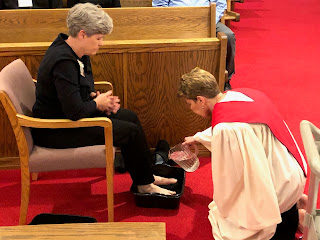 How are each of us called to be a servant to others, and how is St. Martin’s called as a community of faithful people to serve those outside our boundaries? These are the questions we are called to continually ask ourselves, testing out our understanding as it evolves over time.

Now some might argue that you can’t command love for another. Some might argue against loving those who are too different from us, or doubt that such a thing could be done at all. But that is exactly what Christ is commanding us to do.

Once again this is where we might start to wish that English had more than just one word for “love.” Because the word Jesus uses to speak of love is not a romantic love, but a self-sacrificing, parental love. Love that pursues even in the face of obstacles. Love that is as real and tangible as the elements of the story we heard tonight—the bread and wine that were a part of the meal as was recounted in the other three gospels, and the water that is used to wash the disciples’ feet. All five senses are engaged: Sight, hearing, taste, smell, touch.

Anglican priest and poet Malcolm Guite appeals to that complete sense-experience of Maundy Thursday in this sonnet:

Here is the source of every sacrament,
The all-transforming presence of the Lord,
Replenishing our every element
Remaking us in his creative Word.
For here the earth herself gives bread and wine,
The air delights to bear his Spirit’s speech,
The fire dances where the candles shine,
The waters cleanse us with His gentle touch.
And here He shows the full extent of love
To us whose love is always incomplete,
In vain we search the heavens high above,
The God of love is kneeling at our feet.
Though we betray Him, though it is the night.
He meets us here and loves us into light.(1)

Jesus loves us into light—and centers his call to love as an appeal to the entire community to disregard barriers and notions of rank and privilege so that the outside world will know we are Christians not by the things we wear or our own claims—but by our love, especially for those outside the margins of our parish or communities. To love, and risk being vulnerable: those are the two components that enable our discipleship.

Jesus teaches us that to serve others is the greatest way to love and serve God. With God’s help, may we also accept the honor and blessing of being cared for with grace. May we not only seek to serve, but to love each other enough to allow them to serve us. May we always remember that we are cleansed not through our own effort but in community with each other, for the redemption of the world. Through the example of our Savior and out Teacher, Jesus, may we shed our fear of being vulnerable, that we may love God and each other fully, and be healed by love. May we join hands and feet and hearts in the sacrament of Holy Communion, to be strengthened and united, giving thanks to God, and interceding through our praise and thanksgiving, for the entire world and its cares.