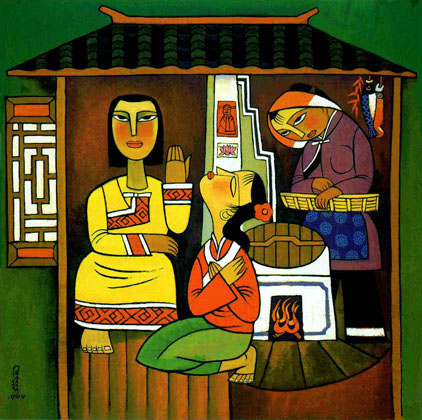 Just a few weeks ago, Jesus sent the 70 out in pairs, instructing them to take nothing with them extra, to accept the hospitality that was offered, and to eat what was set in front of them. Today we see Jesus following his own advice. He has entered the house of Martha, and that is the first thing that is unusual about this story. Most women then were not independent land owners—as was the case even in the US until the 19th century. The implication in the language here is that Martha owns this home. Her sister Mary lives there with her.

One of the commentaries that I read over this story noted that in scripture, siblings often compete with each other and openly display quite a bit of rivalry: Cain and Abel, Jacob and Esau, Jacob’s sons, Rachel and Leah,-- and the unnamed brothers we will hear about next week, as a spoiler. It's the case with us too, right? Sometimes our siblings can be our biggest rivals, so that's relatable.(1)

This story depicts Martha engaged in the work of hospitality, which is often depicted as “women’s work.” While she is juggling “many tasks” in order to take proper care of her guests, her sister Mary sits at Jesus’s feet—the traditional posture in ancient times was that a teacher was seated and the students or disciples sat at his feet. Mary, therefore, is portrayed as a disciple very clearly. Martha’s discipleship is more abstract—she does the cookin’ the cleanin’, and the washin’ that supports Jesus and the disciples in their ministry. We cannot lose sight of how important that is. Someone has to do the cleaning up. 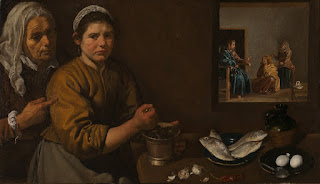 We also can’t assume that Martha was the only one possibly put out by Mary’s sitting there at Jesus’s feet. I wonder if many of the male disciples with Jesus weren’t also put out that she was daring to claim a place usually reserved for men.

This passage has been used to set up a false dichotomy, to set women against each other as either “Marthas” or Marys.” It’s the height of unfairness. Of course, it’s ideal to be both a learner AND a doer. But one unfortunate fact of life is that too often women are expected to both work outside the home and take primary responsibility for the work inside the home. Even here in 2019, married women—even if they work outside the home for pay, STILL end up doing most of the housework, as study after study continues to find, although the gap is closing. My husband is a major exception to that rule, and I know how lucky I am about that.

But when I was a girl, every single girl in junior high was expected to take home economics, and every single boy was expected to take shop class. Being my father’s daughter, I wanted to take shop class and was told no. Then, as I enrolled for 9th grade, my counselor called me in when she got my choices for classes and noted that I hadn’t taken home ec yet, and started to pencil it in in place of a science class I had chosen, as if it was an oversight on my part. Yeah—note what she started to take out—science. Ay. Anyway, when I told her nothing doing, she started to put up a fuss, and called my mom—who told her the same thing that I had: that she taught me how to cook, I had to sew my own gown in Camp Fire Girls, and the science class was more important.

So I was the only girl in my class who never took home ec. And given that this was also the same year I got thrown out of English class and given an F for standing up for a Jewish classmate when my English teacher implied to the rest of class that if he didn’t believe in Jesus, he was in mortal peril, you can see that my 9th grade year was particularly less than fun for a girl who knew her rights. All I knew is that they were trying to shove me into the category of “less than” at school instead of academics.

Hospitality and all that enables it is NOT lesser than academics. But when people read this story as condemning Martha for thinking that Mary should have to help with the chores, I think they are getting the emphasis wrong. I think Martha goes wrong at two spots: First, she is “distracted by her many tasks”—the word translated as “distracted” actually implies being “pulled in too many directions,” which certainly has a lot of the flavor of what I feel when I’m scrambling around doing housework.

But also mixed into that anxiety is a fair amount of resentment at her sister-- and at Jesus. Uh-oh. That’s not good. She violates the whole spirit of hospitality by her complaint to Jesus, too—trying to shame her sister in front of her guests. It is probable that she didn’t hear a word of what Jesus was saying even when she was in the room, her mind being as full of resentment and distraction as it was.

But there’s a part of this related to group dynamics that Sally pointed out to me, and now that I see it I can’t unsee it ever again. Martha is trying to do what is known as “triangulation” which is one of my biggest peeves after lying or meanness. Here. One of the main ways triangulation works is when two people have a beef or dispute with each other, but one or sometimes both of them try to drag a third person into the dispute and communicate to the person they have a beef with using the third person.

If you’ve ever seen the Harry Potter movies or read the books, it’s like the scene in The Goblet of Fire when Harry and Ron aren’t speaking to each other, and so they use Hermione to carry insults back and forth at each other in the guise of talking. 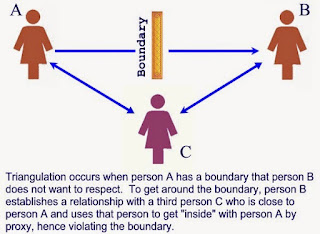 Another way I’ve seen triangulation work, especially in churches, is when Person X comes to a ministry leader or priest and says, “Some people don’t like the way you say ‘Galilee,’” to use a silly example, or when Person X complains to Person Y about something in church and wants Person Y to inform the priest rather than owning it themselves.

At its worst, triangulation can lead to a toxic culture of backbiting and gossip, fraying the fabric of trust and goodwill that is at the heart of Christian community. And Jesus wisely avoids the trap that Martha probably unconsciously lays for him; he’s not going to carry the water for her resentment and get sucked into it himself. Instead Jesus gently, lovingly corrects her for being distracted and worried.

The better part that Mary chose was NOT that she wasn’t helping to clean up, but that she was fully present in the moment sitting at Jesus’s feet, listening and learning. And that enabled her to be fully present to Jesus and the message of God’s kingdom at that time. Perhaps Martha could have seen that Mary listening attentively while she worked meant that she could later be told by her sister everything that Jesus had said.

It’s a great reminder for us all as ministers that it’s not just the things we do, it’s the attitude that we do them with that can preach. When Christians claim to be doing God’s work, but with an attitude of resentment, or judgment, or unkindness, the good things they are doing get lost in the negative static. Yet even the most humble task can testify to the glory of God’s love and grace done in our lives, if done with joy.

That spirit of joy in humble tasks was famously exemplified in a religious work from 17th century France called The Practice of the Presence of God, based on the life and words of a humble Carmelite lay brother known by the name Lawrence of the Resurrection, or simply Brother Lawrence. Lawrence served as a soldier during the 30 Years’ War. He was left permanently lame by his military service, and eventually found his way to a Carmelite monastery in Paris. He was rough, uneducated, and worked as the cook until gout forced him to even more humble work as a sandal maker. Yet people far and wide sought him out as a spiritual advisor for the peace and wisdom with which he performed even the simplest tasks.

One of his sayings, written down after his death, was this:

We ought not to be weary of doing little things for the love of God, who regards not the greatness of the work, but the love with which it is performed… We can do little things for God; I turn the cake that is frying on the pan for love of Him, and that done, if there is nothing else to call me, I prostrate myself in worship before Him, who has given me grace to work; afterwards I rise happier than a king. It is enough for me to pick up but a straw from the ground for the love of God.(2)


In other words—Be here now. Be willing to do the humble work of caring for others, of welcoming and feeding and sustaining community, but be fully present in it, offering all you do to God. Be both Martha and Mary. May all we do be done for the love of God, centered in the joy of helping each other in God’s name and to God’s glory.


Preached at the 505 on Saturday, July 20, at St. Martin's Episcopal Church, Ellisville.