Known By Our Love- Sermon for Easter 5C 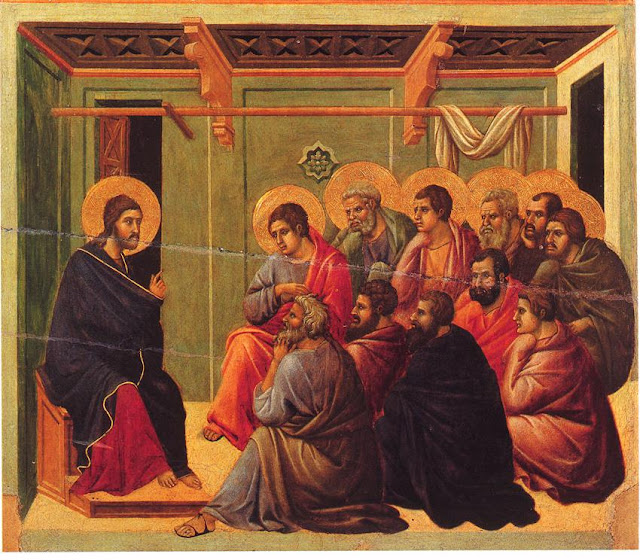 On May 31, 2019, the Church will observe the 85th anniversary of the Barmen Declaration. 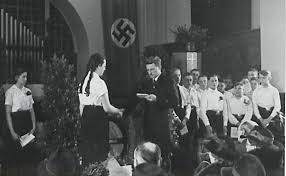 In case you are not familiar with it, this was a document written by German Protestant theologians, including Karl Barth, protesting the take-over of the German Evangelical Church by Hitler’s Nazi supporters in 1933.The Barmen Declaration clearly and scripturally laid out the reasons for their dissent against the creation of what history now knows as the “Reichskirche.”

The Barmen Declaration denounced several false doctrines being promoted in the Reichskirches, such as 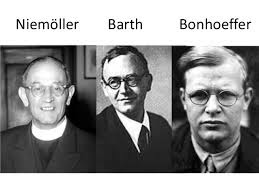 “We reject the false doctrine that the Church could have permission to hand over the form of its message and of its order to whatever it itself might wish or to the vicissitudes of the prevailing ideological and political convictions of the day.” (1) 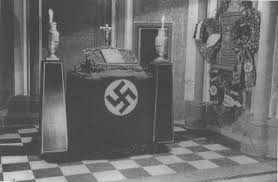 The Declaration also insisted on the separate spheres of Church and State—a separation which the Reichskirche clearly violated, making the German Church an arm of the German Nazi state. It denounces idolatry—such as including Hitler’s Mein Kampf as a sacred text alongside scripture, and hanging the Nazi Swastika flags and banners within the church by the altar, which actually happened.

The Church, they insisted, belongs to Christ, not to countries or other human allegiances that often fail to follow Jesus’s Way of Love.

Many of the pastors involved, including Martin Niemoller and Dietrich Bonhoeffer, would go on to form an alternative, underground Church called the Confessing Church- and several of them, including Paul Schneider, Bonhoeffer, and Niemoller, would end up in concentration camps. Niemoller would later become known for this statement, which I kept hanging in my classroom when I was a teacher:

First they came for the socialists, and I did not speak out—
Because I was not a socialist.

Then they came for the Jews, and I did not speak out—
Because I was not a Jew.

Then they came for me
and there was no one left to speak for me.(2)

Niemoller had started out supporting the rise of Hitler, but eventually realized that hatred and anti-semitism were wrong. He spent the rest of his life after the war especially atoning for some of his attitudes before his change of heart.


Bonhoeffer himself wrote a book, titled in English The Cost of Discipleship, which was an application of Jesus’s Sermon on the Mount. In one of its most famous passages, he talked about “cheap grace” versus “costly grace.” Of course, grace is a gift given to us freely by God—part of God’s love for us. But that gift of grace elicits a response from us in making us not just fans of Jesus but disciples of Jesus. Bonhoeffer wrote:


Bonhoeffer chose to return to Germany from America to be with his people during this terrible regime. Even though a pacifist, he even joined in a plot to assassinate Hitler. For this he was arrested and place in various prison and concentration camps. He would eventually lay down his life for his friends and for his countrymen, executed at the personal order of Himmler on April 9, 1945, a mere 29 days before Germany’s surrender. Even as the end of the Reich was near, with Soviet troops advancing from the East and British and American troops from the South and the West, Hitler made sure this man of God died before he did.

I was thinking about Bonhoeffer, and Niemoller, and the Barmen Declaration as I considered the context and the message of our gospel passage today. Let me help set the scene: the acrid scent of betrayal is in the air. Jesus has just eaten a meal with his disciples, his last one with them. He has broken bread—the literal meaning of the word “companion,” with all the apostles—including Judas, and Judas has just departed to go betray Jesus into the hands of those who considered him an enemy. 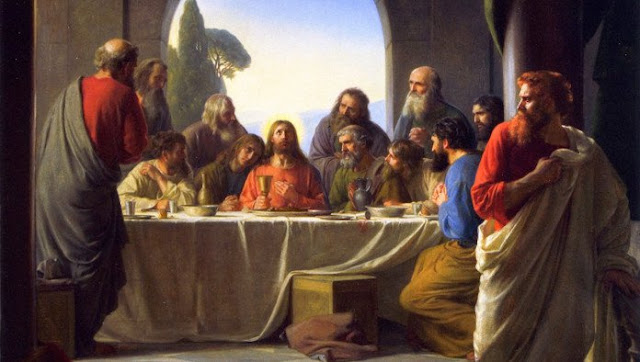 Jesus reacts to his betrayer by first feeding him, by breaking bread with him, by still loving him as a “com-panion.” If Jesus can feed his betrayer, how can we not feed the hungry and care for the poor and desperate among us?

Later in John 15:12-14, he gives two concrete examples of what the love he is commanding us to have looks like: “This is my commandment, that you love one another as I have loved you. No one has greater love than this, to lay down one’s life for one’s friends. You are my friends if you do what I command you.” In other words, self-sacrifice and obedience.

After Judas leaves, Jesus could have said many things. It’s vital to emphasize this: He chose to talk about love.

And he talked about the requirement he was laying on his followers to love not as a hazy romantic feeling or with asterisks or codicils or amendments, but directly. We have to remember that Jesus’s commandment to love is given as the net of betrayal gathers under him—and yet he still urges us to love. That context is vital to our understanding of this command as a beautiful discipline rather than as an empty platitude.


Jesus’ command in John follows the presence of evil and the departure of Judas. This is exactly when we need to be reminded to choose love -- when evil seems to be having its way. When those we thought were close, we thought we could trust, abandon us. When the actions and words of others clearly come from hate and suspicion and prejudice. Choose love….(4)

This is the heart of the Christian message, and yet I certainly know that I shy from the implications of this at the same time. Jesus can do it, but can I? It just seems too hard to give up all our notions of primacy and judgment and easier to draw lines around ourselves as us and set anyone outside the line as “them,” as the “other.” Certainly we all struggle with this, or more likely, try to whittle this commandment down to something comfortable and manageable… and, in the words of Bonhoeffer, cheap.

When I was a kid going to Methodist Church camp in Oklahoma, we were taught what was then a brand-new song by a priest names Peter Scholtes, one that has now become a classic. It went like this:


That song came to mind as I was reading our lectionary readings for this coming Sunday. In our gospel, one of the verses that most stays with me each time I read it is this one:

The passage we read from John’s gospel this week that contains this commandment occurs just after Judas has gone from companionship to betrayal, and has departed to turn Jesus over to arrest and eventual execution. The echoes of Judas’s footsteps haven’t even silenced, and yet Jesus gives us the greatest commandment: to love one another.

We know it’s really not new. Here is the kernel and root of the Christian message—and if you don’t believe me, consider the fact that the command “love one another” appears 14 times hereafter in the New Testament. And we hear the first of those fourteen repetitions right here in today’s gospel. Here is John’s version of that teaching, set in a different context— and John makes it one of the last commands Jesus will relate before his arrest and crucifixion.

Again, “Just as I have loved you, you also should love one another. By this everyone will know that you are my disciples, if you have love for one another.”

Maybe—just maybe—it means all of the above.

It sounds hard. That’s why practice is the key to this kind of love.

What if we committed to loving each other—no exceptions? It might be the start of a revolution. 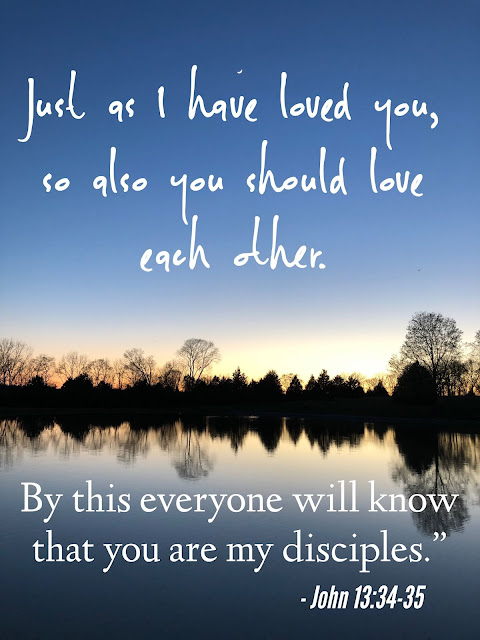 Jesus, who loves us enough to hand himself over to evil for us, is calling us to rise above our instincts and our mutual suspicion and try to love each other. This kind of radical acceptance and love is what was described in John’s vision—the vision echoed in our reading from the end of the book of Revelation. This is the kind of radical acceptance and love we receive not through our own merits but through grace from God.

This is the action Jesus sets apart as the sign of discipleship in his teachings. When we love each other, we truly live as God commands us to live, fully and radically alive. And they—the world— will know we are Christians by our love.

Citations/Resources:
(1) The Barmen Declaration, at https://www.sacred-texts.com/chr/barmen.htm
(2)Martin Niemoller, "First They Came," at https://www.hmd.org.uk/resource/first-they-came-by-pastor-martin-niemoller/
(3) Dietrich Bonhoeffer, The Cost of Discipleship (Nachfolge, or "Following"), 1937, pp. 45-49.
(4) The Rev. Dr. Karoline Lewis, "Resurrection is Love," April 16, 2016 at The Craft of Preaching at https://www.workingpreacher.org/craft.aspx?post=4607
(5) Peter Scholtes, "They'll Know We Are Christians," at https://www.youtube.com/watch?v=ZQyLHi_X83s
Posted by Scoop (Leslie Scoopmire) at 12:53 PM