Praying with Our Feet: A reflection on the witness of Ferguson on Jonathan Daniels' feast day (Speaking to the Soul)

On the feast day of Jonathan Myrick Daniels-Seminarian, Martyr, and Witness for Civil Rights- we marched for peace and justice in Ferguson, Missouri.

Forty-nine years after Jonathan Daniels was shot in place of Ruby Sales after they were released from jail in Alabama for registering African Americans to vote, we went to protest the shooting death of an unarmed teenager, Michael Brown, on the streets of an American suburb by Darren Wilson, a Ferguson police officer. We went into an area that had seen tear-gas and armored personnel carriers on the streets of America aimed at American citizens by American citizens. We went- lay, ordained, Christians, Muslims, Jews, atheists- to lay claim to peace. We went onto streets that had seen rioting, burning, looting, and terrible bloodshed, but also kindness, cooperation, aid, and ministry.  We went into a community where compassion and hope keep breaking out despite all portrayals of chaos and despair, and to witness to that. 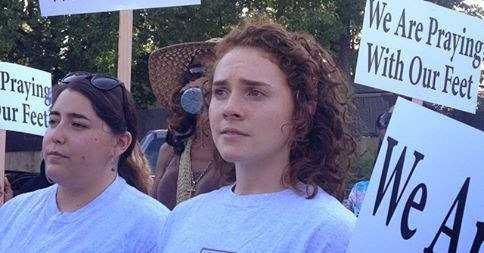 We prayed with our feet for peace and justice, and the right to protest peacefully in the name of righteousness, compassion, and unity. We went not because we shouldn’t be outraged in the face of prejudice and pre-judgment, but because justice needs to be heard over the popping of tear gas canisters and the shattering of shop-windows. We went because we must pluck out the violence, prejudice, hostility, inequality, and mistrust in all our hearts. We went because our silences can oppress as forcefully as our actions.

We came to join with the hundreds of peaceful protesters and residents who are already there. We went because we were asked to be there. We went because we ache for those in mourning, for those in fear, and for those in anger. We went, and we who are Christians were asked to bring our Bibles (and our prayer books) to demonstrate our peaceful intentions. We went to witness, to overcome the pull to look the other way, to move along, to believe that we are not all diminished by injustice to anyone. We went, because when God is in the street, that is where we should be. We went because God is not just in the street, but in the homes and the businesses and the schools and the churches that line those streets.

On what would have been the 75th birthday of Jonathan Daniels, we were still being confronted with the idea that one wrong makes another wrong justified. We went to confront a society that is entertained by scenes of destruction while discounting the very real pain that destruction represents. We went to confront a legacy of segregation and mistrust that is prevalent within our neighborhoods and within our hearts.

We were still being confronted with the fact that in our hearts and our society, bright, tight circles are drawn around “us” versus “them,” and that we simultaneously celebrate that and then decry the fraying of the social fabric that should bind us together in humility, in empathy, and in love.

We went because we know that we all live in the shadowy border between truth and secrecy, between right and wrong, between error and malice, between consequences and justification, between retribution and reconciliation. We went because we are Michael Brown, and we went because we are Darren Wilson. We are the mother crying out for her child, and we are the family hoping their loved one comes home safe each night after attempting to place his or her life on the line for our safety. We went to listen, we went to protest, and we went to pray. We went with the hope that the soft, still voice of peace and justice could be heard over the sounds of destruction and vengeance.

We went to counter the idea that justice should be denied anyone, whether that someone is a teenager walking the street or a policeman whose actions resulted in the death of a person he stopped. We went because justice will break free. We went so that, in the words of the prophet Amos, justice might roll down like waters. Justice, with her companion, Truth, that not only cannot be denied, but that no one should be shielded from. Justice, which can never be confused with retribution. Justice, which must always be tempered by mercy and reconciliation.

On the feast day of Jonathan Daniels, we marched for peace and justice in Ferguson, because we ARE Ferguson, no matter where our houses are. And we must continue to march and pray; we must educate and listen; we must examine our silences as well as our words and actions, until the streets of Ferguson, and every pathway within our hearts, roll down with justice.

(This post was published on Episcopal Cafe's Speaking to the Soul on August 20, 2014. The link is here: https://www.episcopalcafe.com/praying_with_our_feet/)
Posted by Scoop (Leslie Scoopmire) at 7:27 AM