Mark 8:27-38
Jesus went on with his disciples to the villages of Caesarea Philippi; and on the way he asked his disciples, ‘Who do people say that I am?’ And they answered him, ‘John the Baptist; and others, Elijah; and still others, one of the prophets.’ He asked them, ‘But who do you say that I am?’ Peter answered him, ‘You are the Messiah.’ And he sternly ordered them not to tell anyone about him.

Then he began to teach them that the Son of Man must undergo great suffering, and be rejected by the elders, the chief priests, and the scribes, and be killed, and after three days rise again. He said all this quite openly. And Peter took him aside and began to rebuke him. But turning and looking at his disciples, he rebuked Peter and said, ‘Get behind me, Satan! For you are setting your mind not on divine things but on human things.’

He called the crowd with his disciples, and said to them, ‘If any want to become my followers, let them deny themselves and take up their cross and follow me. For those who want to save their life will lose it, and those who lose their life for my sake, and for the sake of the gospel, will save it. For what will it profit them to gain the whole world and forfeit their life? Indeed, what can they give in return for their life? Those who are ashamed of me and of my words in this adulterous and sinful generation, of them the Son of Man will also be ashamed when he comes in the glory of his Father with the holy angels.’ (Gospel for Proper 19, September 16)

Who do I say that Jesus is? Notice that Jesus asks who we SAY that he is, not who we THINK he is. Who do we proclaim Jesus to be, and how do we act upon that proclamation which we make with our words as well as our actions, we who identify as Christians?

If I was a member of the Jesus Seminar, I might talk about the historical Jesus-- a peasant at the edge of empire who may or may not have actually existed, a demythologized God--- which to me, takes away exactly what Jesus means. If I was a fundamentalist, I might say the future judge of my soul, the warrior Lamb whose return will sweep the righteous up to glory while leaving the unsaved to suffer through an age of plague and pestilence followed by eternal torment, or I might talk about him as my buddy, my co-pilot, my help, my rock, someone with whom I have a "personal relationship."

Jesus is many of these things, yes, all at once. But if I was going to use a metaphor to describe the indescribable, I would probably describe Jesus as the aperture between the kingdom of heaven and the life we live.

When I was younger, I once saw a pinhole camera, otherwise known as a camera obscura. There was a lightproof, small room. We seated ourselves on the floor facing a wall, and in the wall behind us there was a tiny hole. The activity outside the room was projected upside down onto the wall in front of us. The tiny hole, or aperture, reflected that scene beyond our room quite clearly. But because the image was upside down, it was still hard to fully comprehend the images. Our orientation was wrong, and it took a while to adjust to the different perspective and make sense of what we were being shown.

I had wanted to see one of these pinhole cameras since I had read a description of one in a book, maybe Cannery Row or Sweet Thursday by John Steinbeck, and he describes one of the main characters dancing across the wall upside down of the protagonist's laboratory. So here I was with the chance to see a camera obscura and experience this for myself.

At first, when we sat down, we were just in the dark in a small room. But once the aperture was revealed, and our eyes adjusted to the dark so that we could see, we could see something new, something outside and beyond us, a new truth, dancing just as Steinbeck described, upside down, Stare at the images long enough, and eventually I was the one who felt like I was upside down. I almost felt like I was about to fall on my head, like I was a bat hanging from the roof of a cave, like when my elementary gym teacher had us compete with each other to see who could hold a headstand the longest.

Perhaps Jesus is like the aperture in a  camera obscura. He is the opening between two worlds and two truths. He shows us things that are outside our perception, things which we have walled ourselves off from. He is the means through which we can see that which is eternal. But what he describes, what he projects, makes us feel disoriented, since it literally turns the world and the world's workings upside down. He is God incarnate (a paradox to our cynical minds), the Son of Man who moves between heaven and Earth and tries to translate to our limited understanding what we are called to be and how we are called to live. 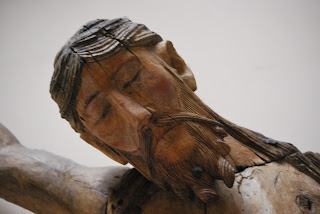 Look how he sets us on our heads: "For those who want to save their life will lose it, and those who lose their life for my sake, and for the sake of the gospel, will save it. For what will it profit them to gain the whole world and forfeit their life? Indeed, what can they give in return for their life?"

This is a very hard teaching to most of us. We are attached to the two lives most of us have, to the lives we have built and to the lives we plan for ourselves. We have PLANS, Jesus! Can we get back to you later about that taking up our cross stuff? And yet Jesus asks us to give these up to follow him, to be his true disciples rather than merely his fans or friends or hangers-on. Of course we want what Dietrich Bonhoeffer derisively called "cheap grace"-- Jesus has saved me, the gift is freely given, so let's just go about our business with that nifty little "get out of jail" card in our wallets, keeping our hearts and minds and souls and actions safely insulated from any sacrifice of WHAT WE WANT and WHAT WE HAVE PLANNED. Like Peter, we want Jesus to be who WE want. We want our life in Christ to be able to be fit easily into our schedule.

Then some of us interpret this teaching as an "either-or" proposition. Are we walled into that little room forever? Or can we supposed to DO something with this knowledge right here where we are? Could it be that Jesus is calling us to live our lives, yes, but grounded in something more eternal, more true than either a monastic denial of the world or a callous embrace of the world's principles while claiming that lifeline of salvation. The image of salvation that Jesus projects before us is of course rooted in this world but focused on bringing the eternal Love into a world that sometimes we have made so broken? Calling us to reorient ourselves on the compass of what is good and what is true and what is beautiful, to see that we live in the midst of God's kingdom?

We see through Jesus what is real and what is eternal. There is a reason why he refers to himself as "the Way, and the Truth, and the Life." Yes, he shows us how to live partly though his death-- a further paradox. If we spend enough time changing contemplation into action, we can open the door of that camera obscura that we usually spend most of our lives in and carry our new, reoriented understanding of what the place we are called to inhabit in the kingdom of heaven right here where we are.

Aperture
Open the window and you want to fly out,
though you never actually do—


I think I see you, still there on the ledge,
where I've left you.


How pulled-awake and flung
can one life be?


Again I thought, It will end.
Again I promised and clung.


I learned there that
to cling was in my nature.


I think I see you, though you flash
quickly through the shutter.


I think I hear you, though I sleep.


Remember this as a bolero,
a finite flaring—


both the tulip tree
burning in full bloom

Email ThisBlogThis!Share to TwitterShare to FacebookShare to Pinterest
Labels: Ordinary Time B, scripture

Heaven beneath our feet 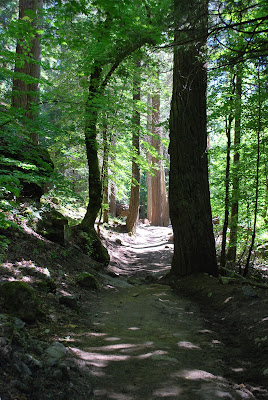 We Christians have much to learn from this. Our time is not ours to do with as we will. It is lent to us to be used for good- to recognize and celebrate the holy in the most mundane things and the most fleeting of acquaintances. Christ walks among us if only we are willing to see him. Christ asks us to walk in love with him and each other, especially here in this world.

Perhaps so many of us search for meaning and purpose simply because we forget the grace that infuses every moment. We live in the world, but the world is not to be despised. This is where the kingdom of heaven begins, where its foundation is laid, where its doors open to welcome all inside. But we have to be there to open the doors, with a heart filled with gratitude for the good things and a smile of welcome on our lips.

Posted by Scoop (Leslie Scoopmire) at 7:41 PM No comments: