1 In the time of King Herod, after Jesus was born in Bethlehem of Judea, wise men from the East came to Jerusalem, 2 asking, "Where is the child who has been born king of the Jews? For we observed his star at its rising, and have come to pay him homage." 3 When King Herod heard this, he was frightened, and all Jerusalem with him; 4 and calling together all the chief priests and scribes of the people, he inquired of them where the Messiah was to be born. 5 They told him, "In Bethlehem of Judea; for so it has been written by the prophet:


are by no means least among the rulers of Judah;


for from you shall come a ruler


who is to shepherd my people Israel.'"


7 Then Herod secretly called for the wise men and learned from them the exact time when the star had appeared. 8 Then he sent them to Bethlehem, saying, "Go and search diligently for the child; and when you have found him, bring me word so that I may also go and pay him homage." 9 When they had heard the king, they set out; and there, ahead of them, went the star that they had seen at its rising, until it stopped over the place where the child was. 10 When they saw that the star had stopped, they were overwhelmed with joy. 11 On entering the house, they saw the child with Mary his mother; and they knelt down and paid him homage. Then, opening their treasure chests, they offered him gifts of gold, frankincense, and myrrh. 12 And having been warned in a dream not to return to Herod, they left for their own country by another road.

Read verse one very carefully: there is something missing.


Find it? For those of us who know some grammar, here’s another hint: it’s an adjective.


Ponder, while I give you a hint. Many Christians display nativity sets as part of their Christmas decorations. If they are (rather smug) keepers of Advent and Christmas proper, they don’t place the little baby Jesus figurine in the crèche, or feeding trough, until the night of the 24th of December. And there we leave Mary and Joseph, surrounding a little half-naked baby (and if you’ve ever had a newborn around, you KNOW that just isn’t right). There are some other figurines: an angel up on top, perhaps, and some animals: donkeys and cattle and oxen and sheep, especially if there’s also some shepherds. And then, around January 5th, or better yet, 6th, they add some new figures: the Wise Men. Now, here’s what’s missing in that first verse—nowhere did it say HOW MANY Wise Men there were. Tradition has it that there are three (but some others say 12), and so we usually put three guys in turbans into the nativity sets on January 6. But Matthew’s Gospel just says there are more than one. That’s it.


I saw an awesome picture of a nativity set that a kid had put together, which frankly is a little less accurate. Enjoy. 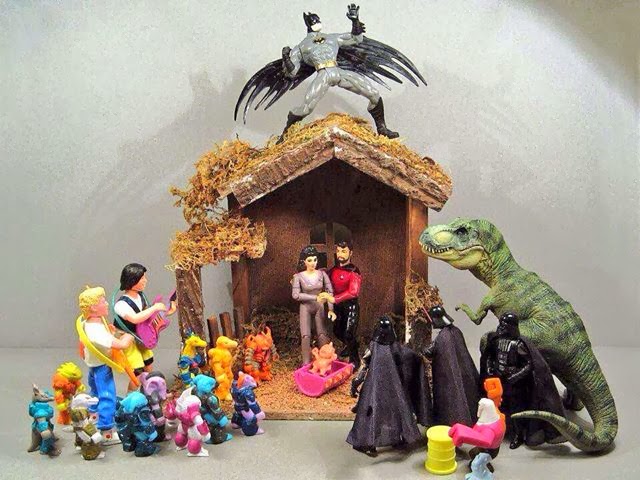 And if this amused you, don’t deny yourself the pleasure of this: http://whyismarko.com/the-50-worst-and-weirdest-nativity-sets/ Really. You’ll thank me later. The Spam Nativity makes me thirsty just looking at it. And here’s one made out of Peeps: http://s44.photobucket.com/user/ClassicChloe711/media/013640x480.jpg.html And now, back to business.


Our selection from Matthew (and only Matthew of all the gospels includes this story) tells part of the story of the (indeterminately numbered) Wise Men. Why are they wise? Because, as non-Jews, they know something the “king” of the Jews, Herod, should know. They obviously expect Herod (and everyone else in Jerusalem) to know, and stop in Jerusalem so that they can fine-tune their directions. Yet, they get their first surprise, for not only do the people of Jerusalem and their king NOT know about the birth of this new king, they are completely terrified by the possibility that there could be a new king on the horizon. One has to wonder why, if the Wise Men WERE indeed so wise, they might not have foreseen this possibility—since the birth of a new king means the end of the reign of the current king, and kings usually don’t take being deposed too well.


Sometimes, these visitors are called “Magi.” This word referred to a priestly class in Persia—which lay to the East of Jerusalem in the country we now call Iran. Over time, the word for magi became applied to sorcery or witchcraft, and is the root of the word “magician.” The wise men have read a sign in the sky—which is why some portray them as astrologers, or “magicians,” although these two things are actually quite different. But these guys are religious. And the star in the sky heralding the birth of this new king (bright shining lights in the sky were often taken in the ancient and even medieval world as a portent of something amazing about to happen) has led them here to Jerusalem, a well-known religious center. So they ask around: where is this newborn king?


Herod would like to know too, so he gathers together his own religious advisors, and the chief priests and scribes relate this prophecy, a paraphrase Micah 5:2:


But you, O Bethlehem of Ephrathah,
who are one of the little clans of Judah,
from you shall come forth for me
one who is to rule in Israel,
whose origin is from of old,
from ancient days.


However, Matthew’s rendering of this prophecy uses slightly different wording that we can look at here for comparison’s sake:


And you, Bethlehem, in the land of Judah,


are by no means least among the rulers of Judah;


for from you shall come a ruler


who is to shepherd my people Israel.'"


Bethlehem, in the area of Ephrathah, was located in Judah. Notice the difference in the second line, however: “who ARE one of the little clans” versus “are by no means the least among the rulers.” Also notice that the original prophecy does not mention “shepherd[ing] the people of Israel--” language that could be used either to describe a king, or the Messiah—but simply says the rule will have an ancient origin.


But it’s close enough. Herod then secretly meets with the Wise Men on the pretext that he wants to worship this new king, too, and asks when they first saw this star. He then sends them on their way, and the star leads them straight to that baby in Bethlehem—but here’s another little glitch: verse 11 says “house,” NOT “stable” or “manger” (feeding-trough, from the French word manger, which means “to eat”). Also, let’s face it, that trip from the East must have taken days or weeks, or even months, especially if the Wise Men had gotten lost a couple of times. So the baby by now could be several months old. But he’s in a house, so there goes the animals from our little scene. The pay the baby homage, and offer him three gifts: gold (worthy of a king, signifying wealth); frankincense, a resin-based incense which was part of a combination burned on the altar in the Temple in Jerusalem (symbolizing worship), and myrrh, a preserved wood resin that was very expensive and used for perfume, medicine, as well as an embalming spice for the dead. As we discussed last year, Gold symbolizes wealth and power; frankincense symbolizes worship, and myrrh foretells Jesus’ passion and death.


As is often the case in scripture, and even today (Carl Jung, anyone?) dreams are seen as significant and meaningful, and out gospel reading ends with a dream: a dream warns the Wise Men not to go back home through Jerusalem, and the Magi do not come back to Herod to reveal the location of the child, demonstrating their openness to God and right intentions. Dreams often work in Matthew as warnings: Joseph is warned not to put Mary from him in 1:20; Joseph is going to be warned to flee to Egypt to save Jesus from Herod’s murderous designs and then an angel in a dream tells him to return when Herod dies; and Joseph is warned in a dream that one of Herod’s sons is ruling Judea and urged instead to Galilee; and in chapter 27, Pilate’s wife is warned in a dream to have nothing to do with Jesus (which he ignores).


Here are the notes we closed with last year when we read the same readings on Epiphany: It is important to note that it is Gentile wise men who are the first to recognize and proclaim of the special quality of Jesus at his birth in the version told here from Matthew, which is used in all three years of the lectionary. Matthew emphasizes Jesus’ Jewish roots as a way to attempt to mediate the relationship between this new sect and its Jewish roots. Thus Matthew starts with demonstrating Jesus’ historical claim as a son of David, but doesn’t stop there and continues back to Abraham. For Matthew, Jesus is the fulfillment of the Law. In Matthew, Jesus is the new Moses—he goes up to a mountain and preaches from it rather than from a plain, he proclaims himself as not seeking to overturn Mosaic law but fulfill it. The coming of the Magi unifies the idea of Jesus as Jewish Messiah foretold in prophecy and Jesus as savior for ALL nations and people, since they, though Gentiles, are the first to worship Jesus and recognize him as being someone worthy of worship. Gentiles are thus assured that they are included in the divine plan through the gift of God’s son (as Paul always insisted); Gentiles reveal that gift to those who should already know and themselves offer gifts and worship.


And finally, a little humor: What would have happened if it had been the 3 wise women? They would have asked for directions, arrived on time, helped deliver the baby, cleaned the stable, made a casserole, and brought practical gifts.


NT Wright , Matthew for Everyone

Posted by Scoop (Leslie Scoopmire) at 8:10 AM