The Truth Before Us-- Sermon for Christ the King Sunday, Year B (Last After Pentecost)

In 1925, the fires of World War 1 still smoldered in the memory of those who had lived through it. And yet, even with the memory of the suffering and destruction still vivid in the minds of millions on three continents, nationalism and fascism began to arise in Europe, political movements who sought to gain power by dividing people into victors and vanquished, that sought to claim the right to empire and oppression as the natural order for humanity. 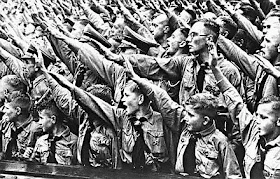 Movements that sought to enslave or eliminate entire races of people based on hatred and fear. Movements that sought to co-opt the church, as in Italy and Germany, and blaspheme God by aligning God with national interests, serving human purposes. It was the continuation of the struggle between good and evil, fueled by technologies of death and worship of might over right unimaginable in human history up to that point.

It was in this context that the Feast of Christ the King was first proclaimed. It is a feast that calls us to remember whose, exactly, we are, and the real power to which we owe our allegiance. In our gospel today, Jesus is handed over to the power of empire, and resists its claim of dominance. Jesus literally speaks truth to power in our gospel today. Governments rise and fall, because they are the works of human invention, but the reign of Christ is eternal.

Our gospel today consists of three questions from Pilate as he examines Jesus. Let’s look at the actual statements of Jesus in our gospel. First of all, Jesus does not answer a single one of Pilate’s three questions:

Pilate:
Are you the King of the Jews?

Jesus:
Do you ask this on your own,
or did others tell you about me?

My kingdom is not from this world….

So you are a king?

You say that I am….
I am a witness to truth.

Unfortunately, our gospel left out Pilate’s final question, what I think to be the most important question of all from this exchange. When Jesus claims to be witness to the truth, Pilate turns away. What is truth? Pilate cynically scoffs.


Thinking about Jesus’s claim to be a testifier to the truth brought back one of my favorite memories from the travels I have taken in my life. A few years ago, my middle daughter and I went to Barcelona with my good friends who are her godparents. One of the biggest highlights of that trip was our visit to the Basilica de la Sagrada Familia—Holy Family Basilica, the work of the great architect Antony Gaudi. 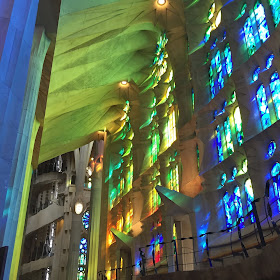 This huge church has been under construction for well over a century, and is still not finished. Its main entrance focuses on the Holy Family and the birth of Jesus. Inside represents Jesus's life and ministry all lit by glorious windows the color of gemstones. The roof is held up by huge columns designed as stylized tree trunks. It's spectacular and palpably holy.

But on the other side of the Basilica, the story of Jesus’s Passion is told. And one of the most striking details that caught my eye, among the myriad of details present, was a copper panel with this phrase written in gold: “Que es la veritat?” “What is truth?” Pilate’s question hangs right there on the side of the outer wall, and if you raise your eyes from there, you see the crucifixion scene. There you see the God who loves us enough to become one of us to redeem us and reconcile us to the dream God has for us. 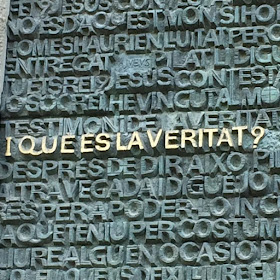 That very question hangs over our society today as powerfully as it did 2000 years ago. We live in what some people are calling a post-religious era. We live in a post-modern world that denies the authority of anything outside of our own personal experiences. We live in a time when lies and gaslighting are the coin of the realm, the foundation of an empire of individualism that tears at the very fabric of communities. The empire in which we live is an empire built on exploitation of weakness, hatred of the other, and the denial of the sacredness of life and creation. What IS truth, indeed?

As a servant of the Roman empire posted to one of the most dusty corners of it, I imagine Pilate has seen enough of the world to know that history is often written by the victors, by the powerful. And Jesus’s kingdom is based on anything BUT that kind of oppression.

Jesus admits that he has followers—and in other places he calls them friends, and even family. Kings don’t have followers—they have subjects. Kings hold their power by force of arms and by fighting, as Jesus notes—and Jesus rejects that kind of kingship. Further, as we are reminded by our first reading being about David’s assessment of his reign, kings often claim that God is like them, rather than them being like God: notice that David calls God “the Strong One of Israel.”

We are all prone to do this, to be honest: make God in our own image as a way of resisting the obligations being made in the image of God places upon us.

In Israel’s history, the demand of the people to have a king is actually a rejection of God’s reign over them. The Hebrew scriptures make it clear that a king’s priorities are supposed to be God’s priorities, since a king rules over the people in place of God. And yet the three kings we hear of in 1 and 2 Samuel all fail to do that, and instead fulfill the prophecy Samuel had warned them about: they take the things of others, and tax the people for their building projects and their wars, and grab their daughters for their harems, and conscript the sons of Israel into their armies  so that they may at the least defend and usually so that they can wage war to expand their territories. 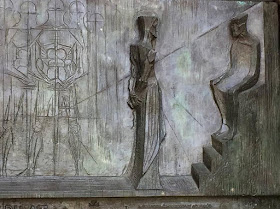 Pilate represents a great empire—one of many who had swallowed up Israel at one time or another. Asking Jesus if he is a king is Pilate’s way of determining if Jesus is setting himself up as a political challenger to the power of Rome. Jesus has been handed over by the religious authorities because they KNOW that he is a threat to their power, yet they do not have the power to put Jesus to death. Jesus avoids the trap they have laid for him that would have made him a rebel against Rome.

Jesus makes it clear, however. Jesus’s kingdom is not geographically limited to a certain place, or even a certain people, which may be why he refuses to call himself the “King of the Jews.” As Jesus repeatedly reminds us, especially in John’s gospel, the commandments or laws of Jesus’s kingdom are not based on keeping order or expanding power, but instead on love. Love of God, and love of each other.

In our world today, we are adrift, bereft, cynical, and weary. Just like Pilate, we often try to preserve our own empires, our own edifices and walls that we tell ourselves are there for our protection and security. But really, those empires and walls just block out the light, hope, and peace that Jesus, in offering himself to us, offers to the entire world. No exceptions.

What is truth? We, like Pilate, ask this, often from either cynicism or its cousin, heartbreak. Often we try to find substitutes that will take the place of truth in our lives-- possessions, distractions, or experiences. We believe that we can set ourselves up as the final arbiter of truth, when we don’t even know what truth is. But just like with Pilate, truth is right before us. Jesus said, “I am the Way, the Truth, and the Life.” And beyond any earthly maneuvers for power, for exploitation, or for domination, this truth will set you free, and give you life and joy and community.

That’s the truth of Jesus’s life. He calls us to be the very best versions of ourselves because he knows that is how we were made to be all along. He has faith in us, and calls us to have faith in ourselves that a better way is possible, through the loving, healing, restoring touch of Christ within our inmost being. This is the truth to which Jesus’s life, death, and resurrection testify: God is love, and those who follow the Way of Jesus walk and live and move in and through and out of love for God but also, and this is the harder part, being animated to live and breathe and speak love for each other. Especially those we may think are outside our comfort zone.

The Way of Jesus was a threat to the power and empires of the world. Yet, periodically, Jesus’s followers have been tempted to claim that Jesus’s kingdom IS of this world, to claim that Jesus loves the same few people we love and hates the same people we fear or despise. But Jesus is not about power, but about service. As Paul insisted over and over again, Jesus emptied himself of all the privilege and power he had had since the beginning of time in order to enter the world as the weakest thing of all: a tiny baby born to a poor teenaged mother in a backwater not many people could find on a map, even today. Jesus represents the power of love, the power of trust. And I’m not sure that’s any less rebellious today than it was 2000 years ago. 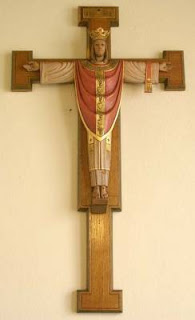 Do we dare allow Jesus to reign in our hearts in such a radical, incredible way? Do we dare transform ourselves into disciples who celebrate Christ’s kingdom of love and compassion and healing? Jesus makes it clear that he is not a king of a kingdom on Earth. Jesus is king in the kingdom of God. Jesus calls to us—“Softly and tenderly Jesus is calling, calling, O sinner, come home…..” as the old hymn my grandmother loved goes.

Come home to true love, to a life whose only rule is to love each other as we love ourselves.

Come home to compassion for those whose terror drives them from all that they have known to seek refuge and shelter.

Come home to our own humanity, shrouded for far too long in fear, in anxiety, in a restless suspicion that our hope lies beyond the scramble we too often get sucked into.

The geography of this kingdom lies upon and within our hearts. Jesus’ throne is not built from compulsion, or force, or power as earthly kings wield, but through the power of love and calling us to take very seriously his call to follow in his example so that we may together live our very best life, one of peace and plenty for all, one that rejects the fears and divisions of this world. Jesus’ power as king over our lives is not the power of demand, but the power of love.

We follow Christ and obey Christ through the choice of love. Making Christ our king means letting love and caritas rule our hearts. Once we accept Jesus as our Lord and king, we are not done. Making a choice to save ourselves is easy. That is why true salvation lies in what we do for others rather than what we do for ourselves by clinging to Jesus like a lifeline. Merely proclaiming Jesus’ name will not bring about the kingdom of heaven—living out Jesus’ love among our fellow beings will bring about the kingdom of heaven and show that Jesus is our king. We acknowledge our king not by words but through deeds—through giving him the throne of our hearts and being his healing, reconciling hand in the world.